There has been a lot of discussion in recent days about the rise of the #blockchain; how a consortium of tech companies are going to do an end run on bitcoin and adopt its “underlying” technology.

Except there is no underlying technology to bitcoin. Bitcoin is the technology.  Sometimes the name bitcoin, as loved by some for its kitchyness, harms the communication of what Bitcoin or the Blockchain is.  It helps empower this idea that there are bitcoins over here and there is a #blockchain over there.  And if we just get these dirty little hippie coins and throw them out, we can move on to working with the #blockchain, except you can’t.

Now I am not going to get into writing about economic incentive mechanisms in a zero trust network,  proof or work vs proof of stake, etc. One because it’s a lot of writing and two it’s really beyond this small brained writers competency.  But, I will make the statement; that bitcoin works. Bitcoin is proven, its 6 years old, and it’s a multi-billion dollar network.  I can send my magic money to you or you can send me some (feel free to test it out: 12UzjKFzeGZpczRepGqSKKhU6XYwLs38zg) and we never have to meet.

And what does bitcoin do exactly?  It goes to the moon ┗(°0°)┛, it lets me buy coffee at Starbucks, or tip random strangers for their pithy remarks, or score your favorite medicinal herb.

No,  bitcoin breaks the concept of delegating trust.  Which is somewhat earth shattering when you consider that our modern society functions on delegating trust.   I trust the government to hire competent people to time the traffic signals correctly, I trust my wife to stop when I use our safe word and I trust my bank to give me access to my money whenever I need. Yet bitcoin upends this model, because I don’t have to trust anyone when it comes to the information stored in the bitcoin blockchain.  There is no central party, validating the information, or controlling access, or modifying the system.  Instead the trust part has converted to a self validating algorithm that is open to anyone.   Now, I recognize that we have to trust that miners stay decentralized.  And there is a very existential debate in bitcoin going on about  how we balance; the need to scale, against the risks of mining centralization.  But, to keep this article short and on topic, I am going to take a leap of faith and assume that bitcoin will work it out.  I believe the overriding interest will always be to keep bitcoin decentralized, because a bitcoin that is not decentralized is worthless.

Today the bitcoin ledger is used to record value,  tomorrow it could be the anchor to a global repository of all kinds of critical records.   This is what many detractors of bitcoin miss.  They see bitcoin as psuedo-money, a bank account or a payment system.  But, Bitcoin is a system that allows for an incorruptible method to store information, that requires no delegation of trust or authority, and no permission required to access or view the information.  All the while, the entire system, including how it operates, is completely exposed for inspection.

I am hard press to identify a human institution in the history of man that has ever worked at this level of transparency.

Some people get that bitcoin undermines our current systems and they don’t like this one bit, even calling for  bitcoin to die in a horrible fire or for the Department of Justice to shut it down. And yet Bitcoin won’t die, dammit. Not a Mt. Gox implosion, or Silk Road shutdowns, or Bit License, or crashes, or angry professors, or thieves, or threats of 51% attack, or government bans, or 1MB block, or bad P.R., will kill off bitcoin.  IT. JUST. WON’T. DIE.

The evolution of bitcoin is a paradigm shift beyond even the internet, the internet was a continuation of a global communication system that had been evolving for hundreds of years, from runners, to horses, to balloons, to newspapers, to telegraph, to telephones, to television, to cat videos.  The Internet pushed out communication to the very peripheral and decentralized many aspects of communications but it still operated under the same trust models that has been in existence since the beginning of time, particularly when it comes to economic exchange.

What do we need a system like bitcoin, that requires zero trust, and is censorship resistant, for?

And this question gets to the heart of why as revolutionary as bitcoin is, its viralness has been on par with an Al Gore Vine.  As a bitcoin believer, I’ve been interacting with bitcoin for over 2 years, and it hasn’t quite changed my life.  Here is where the detractors jump up and  say,  “bitcoin will always be libertarian funny money, it will never achieve mass acceptance, it’s been 6 years.”  To paraphrase a rambling Paul Krugman, “bitcoin is an answer for a problem we don’t have.”

And Krugman is right, if you want to box bitcoin into the existing global hegemony, but I believe there is a reason for Bitcoin’s slow march;  Bitcoin is a warp drive for humanity, but we don’t yet have the Starship to mount it on.

Imagine for a moment that an advanced Alien civilization provided humanity with a functioning  warp drive, with just basic operating instructions, no ship or vessel, just the drive.  We won’t be visiting Alpha Centauri tomorrow or even next year.   Think of all the tech that needs to be in place to take advantage of such a gift.  It could be a decade or more before we are ready to use it. Would that mean there is no future for warp drives?  And what would the naysayers say, “what do we need a warp drive for, we have no Starship!”

It is going to take time to build the ship that takes us to Bitcoinlandia. Bitcoin and truly bitcoin-like systems will spread slowly because it’s not just about saving 3% on a credit card transaction or sending money to your cousin in the Philippines, it’s about a fundamental reordering of society.

A reordering where open systems will replace closed systems.  Even closed systems like Uber, that leverage a decentralized user base, are showing the world that we don’t need a central government authority issuing medallions to get a quality transportation experience.  And it’s not a huge leap to imagine a future Uber could be an A.I. program living on a blockchain, pairing riders and drivers.   Such projects are in the works, like a decentralized exchange, or a decentralized Ebay.  You quickly realize that in a world like this open systems will eventually overpower closed systems.   The technology is evolving fast but the adoption will be slow, because it involves changing people’s perceptions about how economies and society work.  An entire ecosystem is evolving that feeds and reinforces itself, a system which is doing an end run on the current global structure.

These open systems will remove the political aspects from some of the core functions of modern life.  Bitcoin’s first hack is to depoliticize money.   But one can see that eventually other areas could also be depoliticized.   For example take a local municipal transportation system.  I know that corruption in these systems is probably non-existent.  They are the bastion of public efficiency and transparency.   But what happens, if for example, we create an autonomous A.I. whose job is to allocate resources for the repair and maintenance of a subway system.  This A.I. could be supported by an open-source cadre of global developers.  It may even be that the A.I. can evolve itself without human intervention.  There would be no central authority to pervert the A.I. to do its bidding.  The system would have access to a network of  sensors, cameras,  real time information to form a detailed composition of the systems and prioritize repair and maintenance schedules.  The system could interface with a global ledger and other autonomous agents to source and bid the parts, tools, and workers it needs to keep the trains operating.  The A.I. could charge and collect tolls to self fund – needing only the exact amount to do repairs and maintenance and not pad the budget in pursuit of pensions or political agendas or fancy carpeting.  In a word like this we won’t need Hitler to make the trains run on time.

A system like that is very powerful.  Do you want such a system interfacing with a proprietary ledger, which has a backdoor to political entities that can exploit technology?  Or, do you want an open transparent system that has proven itself to be incorruptible?  Sure this example sounds ridiculous and something like that could be decades away  – or maybe not.

When one begins to see the power that an A.I.-  IoT world may evolve into, a tool like an incorruptible zero trust ledger is going to be a needed and powerful thing.  And in a future like this, the value of a ledger like bitcoin could well be immeasurable.  Bitcoin will reach a global tipping point as the systems that need it come online.  As we near that tipping point there will be one system which stands apart from all the rest, one which is truly open, which is more decentralized than all the others, which is un-censorable.

Which leads me back to the the topic of the rise of the #blockchain consortium.  The creation of this coalition, is really an acknowledgement by these  institutions, that their entire reason for existence is in jeopardy.  The truth is, this consortium is about establishing the rules of what they will accept as innovation and not about doing actual innovation.  They have seen the Blockchain and have decided on a #blockchain.  It’s their attempt to take back control.  But, can one seriously expect that these companies, which must comply with strict governmental regulations, and with their business models built on being the gatekeepers to a closed system, that they would provide the world with a more open, more decentralized system than bitcoin?

The speed of technology today is moving beyond lightspeed and approaching ludicrous speed. It’s hard to believe that a bunch of old tech companies and banks, who have missed most of the last decade of innovation are now going to out-innovate a global decentralized movement.   Let me go lookup the last time a consortium of 20 companies brought forth an innovation that people really wanted.  Still googling…it’ll come to me.

By the time the #blockhain consortium gets around to agreeing on a set of standards, technology will have evolved another two generations.   And what’s currently in development for these open systems;  lighting networks, side chains, Digital Autonomous Corporations, Prediction Markets.

So it doesn’t matter what these companies do. Bitcoin won’t die, the truth doesn’t die.  No matter what they do, they cannot survive because their very existence, drives bitcoin adoption.  Their attempt to compete with bitcoin will lead us to the very moment, where we don’t need them anymore. 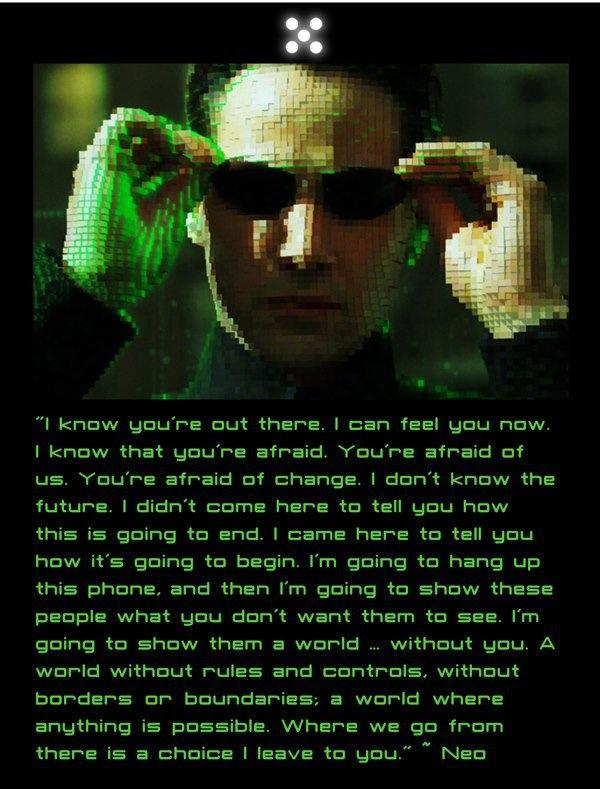 Love it or Hate it, let me know below?

2 thoughts on “The Rise of the #blockchain or How I learned to stop worrying and love the bitcoin.”